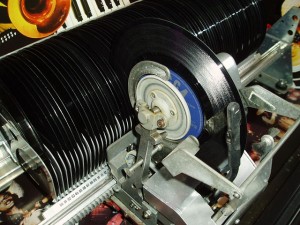 It’s nothing new that the music industry is experiencing a steady downward trend in album sales. A few years ago, chart toppers were moving millions of albums a week. This trend isn’t just continuing, it’s advancing. For the first quarter of 2008, albums sales were down 10.7% from the same period last year, according to SoundScan figures.

As if that isn’t enough, last week’s sales showed an almost 25% drop from last year, and the number one album sold 166,000 copies. This is a very impressive figure for a mid level label, and indie labels would breaking out the champagne, but for transnational companies whose yearly sales are in the billions, these figures point a major crisis. The boat isn’t just taking on water anymore, it’s halfway under the waves.

It’s important to note that this measures only physical sales, and beyond that, only albums registered with SoundScan. While physical sales are traditionally the most lucrative part of the music business, digital sales are where the action – and the money – is at now.

People are still buying music, and billions of dollars worth of it. What’s shifted is the variety that is being bought is expanding at an exponential rate – an alarming development for the companies who invest millions into a single artist. The market isn’t so much evolving anymore, it’s already evolved. The focus around 360 deals is a perfect example of the shift the flow of money around music.

With the the combination of iTunes, Amazon, eMusic, and the army of other digital music sites that now dominate the market, the entry of Wal-Mart, Target and other major retailers into full scale album sales, and the diversity of music offered to people through social networking and file sharing, the business of selling music isn’t the same business it was five years ago; in many ways it isn’t the same business it was two years ago.

The issue at hand isn’t so much the collapse of physical sales as it is the diversifying of people’s tastes. Music is so easy to create and distribute now that the choices are nearly limitless. Anyone with a few ideas and a computer can have an album out on the web for sale, and even produce physical copies cheaply.

So how low can album sales go?

In my opinion, we’re nearing the bottom of the spiral. Physical sales may shrink a bit more, it seems that at this point the only people buying physcail albums are the ones who want the album, and fans can always be counted on to support artists.

I’m not a soothsayer, but I predict that 2008 is the year we see a major shift in the way major labels conduct business, adopting more elements of the DIY and underground communities in signing, developing and marketing artist.

Bottom Line: Sales figures measure something in reality. In reality, the music business is a brand new entity. Welcome to the Age of Variety.